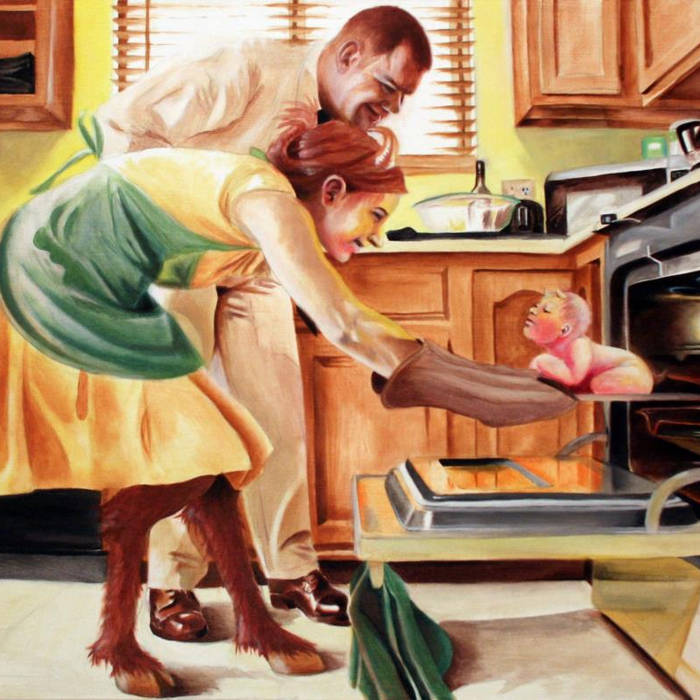 Sometimes the question is not, “Do you like it?” but rather, “Do you need it?”

If “it” is Hey Mandible’s new album The Arse, then the answer is, “Yes, you fucking need it, all right.” Just exactly what it is, well, that’s a tough call. Some call it post-noisecore, others call it post-punk or anti-grunge. But honestly, that nomenclature crap is for music critics who just can’t place it. And that’s the beauty of the music of Hey Mandible. It can’t be placed.

The seething brainchild of three Jacksonville FL-based misfits – Travis Taylor on guitar, Mike Easters on bass, Kevin Roberts on drums, all of them on vocals – The Arse is a saddleless psychedelic gallop on the Mystery Pony, a hyperspace noise-trip headlong into Strangeland, a power-pop stopover at Melody Junction. Still confused? Good. Maybe you’ll just listen to it.

Don’t let the simple bass line of album opener “Supernovatone” fool you. Three seconds in come the feedback swirls, and they don’t let up, launching the otherwise disco punk number into outer space. You can dance to this. You can also smash expensive furniture to it as well. Your choice. Either is the right thing to do.

Go deeper with “Human Ape,” a deceptively catchy ditty that slowly descends into a maelstrom of distortion. You’ll be singing along with it, and you won’t know how it happened, you lost in the madness. But, as the lyrics go, “It’s all right. It’s OK.” “Bitten By the Bone” is a nasty one, too, replete with crunchy guitars and gritty baritone vocals. Think Black Flag in a no-holds-barred grudge match with The Atomic Bitchwax with Dinosaur Jr. as a referee, and you’re getting closer to understanding. Closer…

But lay into “It Figures,” with its mind-bending wall-of-distortion slide guitar intro, and you’re off-kilter again. Juxtapose the synapse-melting swells with the two-part harmony vocals, and you’ve got yourself an anomalous yet infectious head-twister. “Missing Monet” cleans it up a bit, bordering on ‘90s power pop. That is until the jagged time shifts come along, hitting you like unexpected turns on a dark-ride roller coaster at the county fair. And then there’s album’s heavy-duty closer “Kids,” a trans-generational diatribe that could have been a Screaming Trees song were it not so utterly demonstrative.

Don’t be surprised if this album makes you want to break into the neighbor’s house and eat all their food. It has that effect. That the three men who created it are from Jacksonville is apropos. A riverside coastal city surrounded by lush Florida landscapes, Jacksonville is a mix of industry and culture, an angsty blend of downtown hipsters and beachside blue-bloods, and it’s all represented on The Arse. The swampy funkiness of the bogs on the outskirts of town, the “got to get outta this place” anger of the Five Points underground, the homey DIY grit of downtown’s Elbow, the airy devil-may-care attitude of the beach.

Get it? You should. Hey Mandible’s The Arse is a great album, and yes, you fucking need it.

Bandcamp Daily  your guide to the world of Bandcamp